Menlo is a framework for rapidly developing decentralized applications (dApps). This framework is designed to provide users with a user experience on-par with the centralized apps they’re used to. While Menlo is different in many ways from “traditional” web app and even dApps, if you’re familiar with the Single Page Applications style of webapp architecture, Menlo should be relatively easy to understand. It can be used to build a variety of dApps such as a censorship resistant social media site, a blog, a crypto enabled eCommerce site, or a even a crypto exchange.

It consists of two major components:

A “Content Node”, which is a “back end” NodeJS / Express application which sits on a web server. It’s essentially a server side caching system for blockchain data. It has RESTful routes designed to be consumed by the front end. It processes data coming in and performs CRUD operations. It’s not possible to actually Delete or Update data, but we’ll get to that later. Data is not only stored on the Content Node, but also stored on IPFS and Ethereum, making Menlo apps decentralized and censorship resistant. This is quite different from how most dApps are built; our system caches data on a web server for speed so users who may not have any crypto can at still read the dApp, as well as for search engines to easily index content.

A “front end” single page application built in ReactJS. This is similar in many ways to a “traditional” dApp. It makes asynchronous calls to the Content Node as well as interfaces with a Web3 provider (we recommend MetaMask) for transactions. We built a demo application (Block Overflow), a nod to our favorite developer Q&A site, which has a wide variety of features common to many dApp use cases. It has many routes in place for actions such as posting content, upvoting, commenting, etc. The front end comes with Truffle and smart contract specific to the Q&A site use case but is easily customizable. It also comes with many common front end nice-to-haves such as Sass, Material UI, and many interface elements like drop down menus and loading animation.

This version of Menlo is an alpha release, but we hope it will give you everything you need to build a fast, user friendly dApp at hackathon-like speed.

Architecture of a Menlo dApp

About the demo app, Block Overflow

We built Block Overflow as the demo app for two reasons.

A technical User Journey of asking a question, answering, and voting

Heads Up: Sometimes MetaMask pops an overlay to approve, sometimes it does not, and you have to click on the fox      icon in the top of the window. It’s a little inconsistent. The fox will have a number on him as pictured below.

How to download and run Block Overflow locally on your computer.

It’s possible to install the entire Block Overflow front end on your local machine. Out of the box the dApp points to the smart contracts and Content Node operated by the Menlo team for Block Overflow. You can of course launch your own Content Node;

Node.js: If you do not already have it, you will need to install Node.js on your machine. We recommend the tutorials on the Node.js site. Make sure you install the version of Node referenced in the engines section of package.json. https://nodejs.org/en/download/package-manager/

Node Version Manager: You will need the right version of Node.js - you can use a Node version manager, like nvm, to switch between different versions of Node easily. There is a good tutorial on their Github: https://github.com/creationix/nvm

MetaMask: An Ethereum wallet with a Web3 provider is required to use Block Overflow. We recommend the chrome extension MetaMask, but other Ethereum wallets such as Mist or Parity will work as well. You can find MetaMask at https://metamask.io/

Get some ONE Tokens: The Menlo ONE Token is required to use Block Overflow. The ONE Token has a special function (TransferAndCall) which the smart contracts for posting and replying depend on. It allows a client to send ONE tokens and perform a function on the token receiving contract in one atomic solidity call. You can get ONE from several exchanges including Bitmart https://www.bitmart.com/trade/en?symbol=ONE_ETH and IDEX https://idex.market/eth/one . After which send some to your MetaMask wallet.

Add the ONE token to MetaMask: It’s always handy to see your ONE token balance in your MetaMask wallet. At the time of this writing you have to add the ONE token address manually. Click “add token” and enter the ONE Token’s address which is:

We also put together a separate tutorial on this here. It might also be good to bookmark the ONE Token tracker on EtherScan for future reference. https://etherscan.io/token/0x4d807509aece24c0fa5a102b6a3b059ec6e14392

That’s it!
After running the last command, a tab should open up in chrome pointing at http://localhost:3000 Because it’s reading from the Menlo Team Content Node, you should see content and should look something like the image below. You’re now apart of the web 3.0. 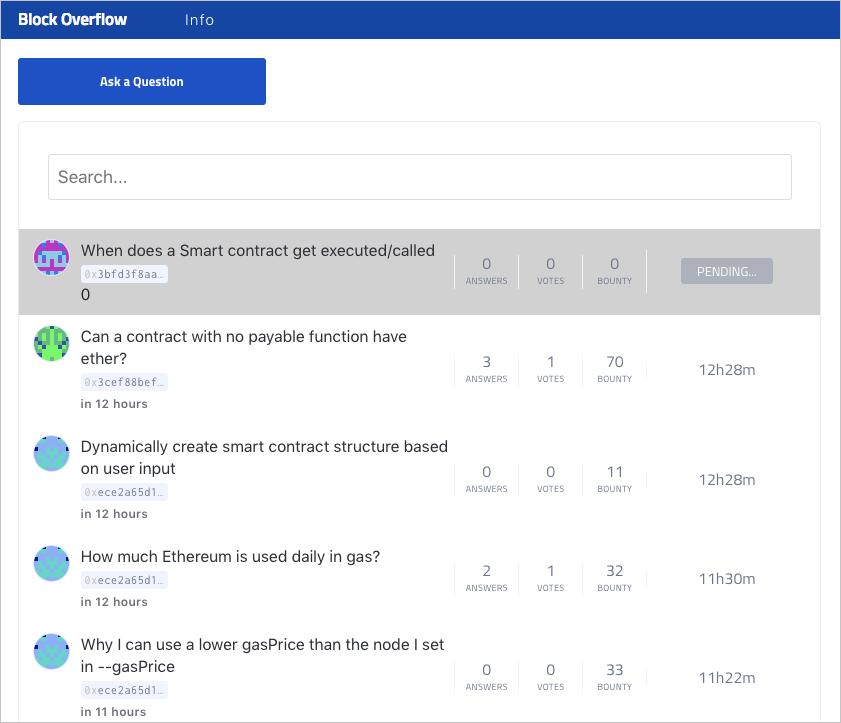 Troubleshooting If you any problems install the dependencies, you might want to switch to NPM v5.10.0 - You may have mixed results with other versions. The easiest way is to delete the block-overflow folder and start again from scratch, but run npm install [email protected] before npm install

If you have any other problems, please feel free to ask for a hand in the Menlo Telegram channel https://t.me/Menloone or you could your question on the public version of Block Overflow. https://blockoverflow.menlo.one/

There is not much difference between running Block Overflow on your computer or on a web server such as AWS or Heroku. It’s a React dApp pointing at the Menlo Team Content Node. Heroku is probably your easiest option and Block Overflow will run on one of their default NodeJS boxes.

In this section we’re going to install a Content Node which includes IPFS and Ethereum on AWS.

Go to AWS, sign in or click on create AWS account. Choose Personal Account unless you have a business setup, for which you will need the company details. You will have to enter your card details for a small refundable charge to verify your identity. Once the registration is confirmed, you can go to the console.

Now that the account is setup, you are ready to launch an EC2 instance. Type Ubuntu in the search bar and select the your server. Make sure 64-bit (x86) is checked.

Ensure you have at least 2 Terabytes of storage.

Select Review and Launch (other settings can be configured later if needed). The next screen might show a warning about the security of the instance and changing security group settings. You can ignore this for now.
Go ahead and click Launch.

On the next screen, you will be asked to create a key pair which allows you to SSH into your instance. Follow the instructions to create a custom name key pair and store it somewhere on your PC where you can access it later.

SSH into your instance

Note: For almost all of these commands you have to be root - therefore we suggest doing sudo bash at the beginning and running the rest of the commands as root:

Initialize and mount the EBS volume

Lists out the devices you have on the EC2 instance. For example:

In this example, it’s nvme1n1 that is a 3T volume type disk but that has not yet been mounted. It will not have a file system on it initially which you can check and verify with the command:

The response is data because there is no file system. So, lets initialize a file system and mount the drive:

You will see a UUID listed as the unique ID of this device. Use that to mount it in fstab in order to mount the volume on every reboot:

Move executable to your bin path

To surface the gateway over HTTP

You can now reboot your instance and make sure IPFS is running by:

Get Certbot to get an SSL Cert

Use CertBot to get your SSLs for IPFS.menlo.one and CN.menlo.one

First point cn.menlo.one (or your domain) to your AWS box.
Then:

You can test this config by doing:

To interact with Geth

Attach to the geth console and enter this script:

All the data on Menlo is stored on IPFS. You can see the data on IPFS yourself by following these steps:

How Do I Change the contract?

If you want to change the MenloTopics or MenloForum contracts, you will need to change several files across the front end and Content Node. Lets take changing MenloForum as an example:

In the front end (block-overflow):

If you look at the code in src/services/Forum.ts or src/services/Topics.ts all they really do is read the state of the contract, track events and cache them in an array and track any transactions that change state so the Content Node can use websockets to notify clients that they should refresh the contract state. All of the state of a contract is returned in one GET call making interactions between front end and Content Node very efficient.

We want the above process of changing or adding contracts to be considerably simpler. In the future we aim to make setup as easy as:

Anyone and everyone is welcome to contribute to this project. The best way to start is by checking our open issues, submit a new issue or feature request, participate in discussions, upvote or downvote the issues you like or dislike, send pull requests.

Or, if you think you can help accomplish what’s in the “Moving Forward” section above, we’d love to help you create a branch and a proper path forward toward that functionality.